Even So “Come Lord Jesus”

For many, the timing of this prophecy is understood to be at the end of the seven-year tribulation period, when the antichrist, satanically inspired, is trying once and for all to destroy Israel and the Jewish people. All the nations of the world, under his leadership, will come together as one and gather as a vast army surrounding Israel. This final battle is what is commonly called Armageddon and will be focused primarily in the Jezreel Valley near Megiddo in northern Israel. Israel, hopelessly outnumbered is given supernatural empowerment by the Lord to withstand the onslaught. Zechariah 12:8 describes it in this way:  “In that day the Lord will defend the inhabitants of Jerusalem, and the one who is feeble among them in that day will be like David, and the house of David will be like God, like the angel of the Lord before them.” That is the context of Jesus’ return to earth. Israel is under attack from all the nations of the world, holding them at bay but ultimately needing the Lord’s intervention to save them.

Zechariah 14:3-4a describes what happens next. “Then the Lord will go forth and fight against those nations, as when He fights on a day of battle. In that day His feet will stand on the Mount of Olives, which is in front of Jerusalem on the east.” One of the blessings of my ministry with Chosen People Ministries is that I get to lead tours to Israel every year. One of my favorite places to go on those tours is the Mount of Olives so that I can take the opportunity to teach about this particular prophecy of Jesus’ second coming. Israel is in a hopeless situation and in need of the intervention of the Lord to save her. Jesus returns to fight on Israel’s behalf, and the place He comes to first is the Mount of Olives in Jerusalem.

At this point we need to ask an important question. Why does Zechariah write, “In that day His feet will stand on the Mount of Olives?” He could have said, “In that day He will come back to earth on the Mount of Olives.” The meaning would have been virtually the same. However, Zechariah, under the inspiration of the Holy Spirit, is painting a picture for us of our Messiah with the visible nail scars on His feet and hands. The parallel to Zechariah 14:4 is 12:10, “I will pour out on the house of David and on the inhabitants of Jerusalem, the Spirit of grace and of supplication, so that they will look on Me whom they have pierced.” When Yeshua (Jesus) returns to save Israel from that final onslaught, He will be visible for all to see.

When the Jewish people see Him and recognize that Jesus truly is the promised Messiah of the Hebrew scriptures, that will be the fulfillment of Romans 11:26, “And so all Israel will be saved.” This does not mean that every Jewish person who has ever lived gets a free ticket to heaven because they are Jewish. Rather, all the Jewish people alive when Yeshua returns will recognize who He is and come to faith in Him as their Lord, Savior, and Messiah. Even so, “Come Lord Jesus.” 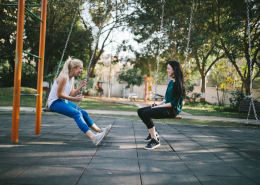