God is Our Shield and Our Sure Defense

Israelis Are “On Edge”

There is no question that the looming threat of increased hostilities with Iran makes the average Israeli deeply uneasy. For most, the issue is fairly clear: If the Iranians develop nuclear weapons and the ability to fire these weapons on Israel (it is generally agreed that Iran already has the missile technology to do this), then it is likely that Iran will use these weapons against Israel.

The problem faced by Israeli leaders at this moment is whether to be proactive or reactive given the circumstances. If the decision is made to be proactive, then the question of timing arises—when should Israel launch a preemptive air strike on Iran? Every Israeli understands that the longer they wait, the more opportunity Iran will have to secure reactors and other nuclear machinery in underground bunkers that will make it more difficult for Israeli warplanes to find and destroy them. Additionally, even if some diplomatic progress is made, Israelis profoundly distrust the current Iranian leadership, which only increases the tension felt by the average Israeli.

The Potential for Severe Retaliation

If Israel performs a first strike on Iran, the threat of retaliation is an overwhelming concern. However, it is not direct retaliation from Iran that is the most worrisome. From what I gathered from listening to the news in Israel, reading the paper, and talking with our staff and with many Israelis, they fear that a barrage of missiles will rain down upon Israel from southern Lebanon and Gaza—as has happened in the past—possibly causing tremendous destruction of property and human life. The “Dome,” a new defense system that blocks missiles from entering Israeli airspace, has proved to be moderately effective, but would never be able to keep out all of the missiles fired from such close range.

The previous severity of attacks by Hezbollah from southern Lebanon upon the northern part of Israel caused almost 1,000,000 Israelis to leave the North and move to the “safer” desert cities in the southern part of Israel. This disruption is what led Chosen People Ministries to begin what has now grown into a very robust benevolence ministry. Can you imagine what would happen if one or two million Israeli citizens fled their homes to get away from the missiles fired from southern Lebanon or from Gaza? The impact upon Israeli society, the economy and upon quality of life would be incredibly disruptive.

I believe Chosen People Ministries must be in position to bring practical relief as well as the Gospel to Israelis in the event that Israel attacks Iran, and Iran’s proxies, Hezbollah and Hamas, retaliate against Israel. Israelis live each day with implacable stress and tension, not knowing if it is safe to take their children to the park or to go to the grocery store, as events could turn dramatically within moments!

How Can Christians Pray about the Potential Israel-Iran Conflict?

I realize that this report is alarming. Yet we know that nothing is impossible with God and that He hears the prayers of His people. I ask you to join me in prayer—pray that Iran stops developing nuclear weapons! Even more importantly, pray that the leaders of Iran turn to Jesus… and that the leaders of Israel do so as well! I still believe that Jesus is the solution to every problem, both large and small—so we need to keep praying with great faith, believing that God will touch the hearts of Iranian leaders and cause them to abandon their hatred of Israel. I believe that when people learn to love the Lord and the Messiah of Israel, they will also grow to love the people of Israel!

Although I am sorry Israelis are facing this terrible threat, it is also true that many are now more open to a relationship with God than ever before. In fact, a recent study in Israel suggested that the average Israeli now believes in God and is becoming more spiritually-minded and less secular!

There is also no question that the number of Israeli followers of Jesus has more than tripled in the last 10-15 years![1] So, please pray for the peace of Jerusalem and that the Prince of Peace will reign in the hearts of individual Israelis.

Pray especially for the growing work of your Mission to the Jewish people in Israel. We continue to add new staff members, establish new centers and share the Gospel with hundreds of Israelis each month through our evangelistic efforts, benevolence programs (we are now feeding 3,000 families a month in Israel) and in so many other ways.

Are these events in the Middle East part of the unfolding of end time prophecy? Of course! You only have to visit Israel to know this is true! The hope of Messiah’s coming gives my soul great comfort, but more importantly, it motivates me and our global staff to do more, to be more faithful and to rely on the power of the Holy Spirit as we know that the days will grow more difficult before He comes!

I treasure the words of the Apostle Paul, who reminds us that God is still working among His chosen people and that one of the critical events of the last days is the turning of the Jewish people to Jesus. How I long for that day!

For I do not desire, brethren, that you should be ignorant of this mystery, lest you should be wise in your own opinion, that blindness in part has happened to Israel until the fullness of the Gentiles has come in. And so all Israel will be saved, as it is written… (Rom. 11:25-26).

Looking forward to His coming, 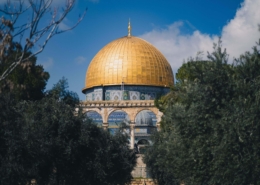 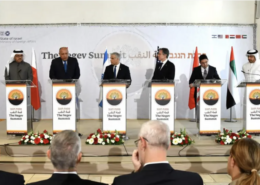 The Iran-Israel Conflict
Scroll to top