Anyone who has ever traveled knows how confusing it can be to get around. It’s not enough to say, “I want to get from point A to point B.” You’ll need directions, landmarks, warnings about treacherous terrain. And you’ll want to know the rules of the road, so that you’ll be able to avoid those costly traffic tickets.

In fact, a travel guide is what you’re looking for–a compilation of everything you’ll need to get where you’re going. According to traditional Judaism, the Oral Law and its later written form, known as the Talmud, does precisely this. It is Judaism’s travel guide through life–a roadmap for righteousness designed to show the observant Jewish person how to follow the written Torah (Law) and the Hebrew Bible.

The Oral Law and the Sinai Revelations

To understand this, one must first know about the traditional Jewish belief that there were two revelations at Mt. Sinai, the Written Law and the Oral Law.

According to Orthodox Jewish belief, the Written Law that Moses received from the Lord is only part of God’s revelation. Another Law was revealed as well, and handed down orally through generations. This Oral Law is said to be the necessary accompaniment that makes the commandments of the Written Law intelligible.

For example, the Written Law tells us “…you may slaughter from your herd and from your flock…just as I have commanded you” (Deuteronomy 12:21). But when you search the Scriptures for specific instructions about slaughtering, you will search in vain. From these and many such instances in the Bible, the Jewish sages have posited an Oral Law that completes the written letter of the Lord’s commands.1

So, if the Written Law is the “point A to point B” of the Lord’s roadmap, the Oral Law is the indispensable “travel guide” that will get you there.

The Talmud – The Oral Law and Commentary

For centuries, the Oral Law was just that–a tradition passed down by “word of mouth” by the great teachers of Israel. However, the destruction of the Temple in A.D.70 and the devastation of Jerusalem in A.D. 135 created a national and religious emergency. Religious leaders were scattered and scarce. For this reason, in about the year 200, the great Jewish sage, Rabbi Yehudah ha Nasi (Judah the Prince), did what no one had ever done before–he began to write down the Oral Law.

Known as the Mishnah (learning through repetition), Rabbi Yehudah’s work systematically documented six major “orders” of the Oral Law, each of which dealt with some important aspect of Jewish life. They are Zera’im (Seeds), encompassing agricultural laws; Mo’ed (Festival), dealing with holy days; Nashim (Women), about marriage, divorce and other family matters; Nezikin (Damages), which comes to grips with legal and financial issues; Kodashim (Holy Things), about the Temple and its sacrifice; and Toharot (Purities), the application of the laws of ritual purity and impurity. These orders are divided into 63 subsections (called “tractates”).2

The Mishnah also contains the weighty opinions of teachers called Tanna’im (repeaters). Over the following centuries, the Mishnah was extensively analyzed and debated by later generations of Jewish religious leaders who became known as the Amora’im (teachers). Their added commentary, known as the Gemara, was written in Aramaic, including their paraphrases of the Hebrew Scriptures.

These works, plus additions known as Tosafot and Aggadah (“additions” and folklore) compose the Talmud, which is itself an Aramaic word for “learning” or “study.”

There are actually two Talmuds–the better-known Babylonian Talmud, which was edited in about A.D. 500, and the Jerusalem Talmud, which may have been codified about a hundred years earlier.3

The Talmud is encyclopedic in length-about 36 volumes. It is the authoritative teaching of Halachah, the rules of Jewish life. Observant Jews return to it again and again as a source of wisdom, inspiration and guidance.

Even in the time of Jesus, the Oral Law was by no means an agreed-upon subject within Judaism. But the Pharisees, who became the voice of “normative Judaism,” acknowledged it and, as history shows, it was they who carried the day.

Jesus, the Pharisees and the Oral Law

Many of the controversies between the Pharisees and Jesus that are recorded in the Scripture have to do with their differing interpretations of the place and purpose of the Oral Law. For example, the written Torah forbids working on the Sabbath. Luke 6:1-2 records:

Now it happened…that He went through the grainfields. And His disciples plucked the heads of grain and ate them, rubbing them in their hands. And some of the Pharisees said to them, “Why are you doing what is not lawful to do on the Sabbath?”

By referring to “plucking” and “rubbing” the grain, Luke is giving us clues as to exactly what the Pharisees’ objections are. According to the Talmud, the disciples were breaking the Sabbath in quite a number of ways. According to the Mishnah, “He that reapeth corn on the Sabbath…is guilty; and plucking corn is reaping.” Rubbing the grain out was considered to be threshing–another violation. “In case a woman rolls wheat to remove the husks, it is considered sifting; if she rubs the head of wheat, it is regarded as threshing; if she cleans off the side-adherences, it is sifting out fruit; if she throws them up in her hand, it is winnowing” [Jer. Shabbat 10a].4

Other examples in which the Oral Law sheds light on the respective positions of Jesus and the Pharisees include the washing of hands (Mark 7:1-9), the subject of divorce (Mark 10:1-12) and the instances in the Gospels that deal with the healing miracles on the Sabbath, such as Mark 3:1-6 and John 9.

The Heart of the Issue

To this day, the various perspectives on the Oral Law within Judaism are still clashing. And scholars–Christian and Jewish–examine the teachings of Jesus in an attempt to place Him either along or outside the spectrum of Jewish thought.

But the heart of the issue is not whether Jesus validated the Oral Law or to what extent He might have done so. What matters more is the biblical truth that “man shall not live by bread alone; but man lives by every word that proceeds from the mouth of the LORD” (Deuteronomy 8:3).

The words that matter most are those of Jesus the Messiah. He is the living Word through Whom everything was created and to Whom everyone must eventually answer. 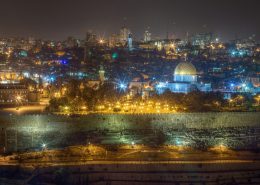 The Promise of Forgiveness Fulfilled in Messiah
Scroll to top