If you are looking for a tangible lesson in who Jesus is, look no further than the kosher section of your local grocery store! Specifically, look for matzah. You might be surprised at how matzah points to Jesus in several powerful ways.

When God struck down the firstborn sons of Egypt, He told the Israelites to eat unleavened bread—that is, bread made without yeast (Exodus 12:14–19). They were also to avoid leaven for seven days every year to remember how God saved them from slavery. This seven-day festival is called the Feast of Unleavened Bread (Exodus 23:15). Jewish people today refer to the day of Passover and the week of unleavened bread collectively as Passover and celebrate by taking part in a special meal called a Seder that retells the exodus story. Different elements of the Seder symbolize certain aspects of God’s deliverance.

For instance, early in the Seder, we dip parsley in saltwater. This act is a reminder of the bitterness of slavery. Specifically, the salt water represents the tears of the Israelites as they cried out to God for deliverance (Exodus 2:23). One of the most important items of the Passover Seder is the matzah, or unleavened bread. It was the Passover matzah that Jesus used as an illustration when He told His disciples, “This is my body given for you” (Luke 22:19). As we consider the matzah’s role in Passover and Scripture, we find several fascinating parallels between Jesus and this specific bread. Here are five ways matzah points to Jesus.

1. The Messiah Is without Sin

Matzah, the unleavened “bread of affliction” (Deuteronomy 16:3), is central to the celebration of Passover. God instructed Israel to eat only unleavened bread for seven days during this holiday. In Exodus, the Israelites ate unleavened bread because they left Egypt in haste and did not have time to add leaven (Exod 12:34). Throughout Scripture, leaven also symbolizes sin. According to Paul, a little yeast spreads to all the dough, puffing it up (1 Corinthians 5:6). Likewise, sin infects the whole person. When Jesus told His disciples to beware of the teaching of the Pharisees and Sadducees, He said to “beware of [their] leaven” (Matthew 16:6, 12). That is, even a little bad teaching can cause significant damage. Just as matzah has no leaven, Jesus never sinned. He lived the way God intended all people to live—free from falsehood and wrongdoing.

The Messiah is the only human who has fully embodied love, kindness, goodness, and faithfulness (Galatians 5:22). Though He faced temptation, He always responded in God-honoring ways. Jesus led a righteous life to justify many (Isaiah 53:11). God counts as righteous all those who believe in Him. The Messiah can forgive us and make us righteous no matter what we have done. He frees us from sin so we can live for God. The matzah in the Passover Seder reminds us that the Messiah is without sin. Through Him, we can be free from sin and death as well.

“Your boasting is not good. Do you not know that a little leaven leavens the whole lump of dough? Clean out the old leaven so that you may be a new lump, just as you are in fact unleavened. For Christ our Passover also has been sacrificed” (1 Corinthians 5:6–7).

2. The Messiah Was Broken, Striped, and Pierced

Matzah, so central to the Seder, also symbolizes the nature of the Messiah’s death. At the Seder that Yeshua celebrated with His disciples, He broke matzah and said, “This is my body which is given for you” (Luke 22:19). The imagery is striking. Yeshua’s body was broken to pay the price for our redemption. He allowed the unrighteous to take His life, for as God in the flesh, no one had the power to take His life from Him. Yeshua willingly endured death on our behalf. He paid the penalty for our sin so that we could enjoy eternal life with God (Romans 6:23). As the apostle Paul wrote, the Messiah “loved you and gave Himself up for us” (Ephesians 5:2).

Though we do not precisely know what the unleavened bread looked like at the Last Supper, the appearance of matzah today reminds us of what Yeshua endured for us. This bread is primarily pale, with some tan-colored lines where the dough was more cooked. The pattern gives matzah a striped look. It reminds us of how Yeshua was beaten and whipped (Matthew 27:26–30). Matzah also has rows of small, perforated holes, illustrating how Yeshua was pierced with nails to die on a tree (Luke 23:33; Psalm 22:16). Matzah is genuinely an amazing symbol of the Messiah’s sacrifice.

“But He was pierced through for our transgressions, He was crushed for our iniquities; the chastening for our well-being fell upon Him, and by His scourging we are healed” (Isaiah 53:5).

3. The Messiah Died and Rose Again

Yachatz, which means “divide,” is the breaking in half of the middle matzah from the matzah tash, the compartmentalized pocket in which the leader of the Seder places three portions of matzah. The leader then takes the larger half of the broken middle piece, called the afikomen, wraps it in a clean, linen cloth or napkin, and hides it for the children to find later after the Passover meal. A traditional Jewish interpretation of the three-in-one matzah tash says they stand for Abraham, Isaac, and Jacob. Another Jewish interpretation says it symbolizes the priests, the Levites, and the people. Some Messianic Jews also see the three pieces of matzah as the Father, Son, and Holy Spirit. All these views pave a biblical and Jewish path straight to the atoning death of the Messiah.

Yeshua is also connected to the Akedah (binding), the story of Abraham’s attempted sacrifice of his promised son in Genesis 22! Just as Abraham was willing to sacrifice and offer his beloved son, God so loved the world that He gave—without sparing—His only begotten Son for our sake (John 3:16).

Yeshua came as that middle priestly matzah. He acts as the “middleman,” as His priestly office is to mediate between God and people. Yeshua made intercession once and for all time by offering up His own body to be broken, like the matzah. As He told His disciples at the Seder, “This is my body which is given for you” (Luke 22:19). Like the afikomen, Yeshua’s body would not only be broken but also wrapped in linen, hidden away for three days, and discovered later, resurrected.

“He is not here, but He has risen. Remember how He spoke to you while He was still in Galilee, saying that the Son of Man must be delivered into the hands of sinful men, and be crucified, and the third day rise again” (Luke 24:6–7).

4. The Messiah Is the Bread of Life

At His last Seder with His disciples, Jesus compared the matzah to His body. That moment, however, was not the first time He referred to Himself as bread. Earlier, He declared, “I am the bread of life” (John 6:48). Bread is a staple in many cultures. Different peoples have created their own delicious forms of bread, including baguettes, pita, and naan. To this day, bread is a significant source of sustenance for many people. By calling Himself the bread of life, Jesus was offering Himself as our nourishment. Just as food is necessary for physical survival, we must come to the Messiah for us to be spiritually alive.

Passover matzah is a reminder that we have life because of the Messiah. Both our present physical life and eternal life depend on Him. Indeed, “All things came into being through Him” (John 1:3). Everything exists by the grace of God, who made us and continues to sustain us. We also have eternal and abundant life in Jesus, the bread of life. Eternal life does not simply mean living forever. Instead, eternal life means knowing  and  loving  God (John 17:3). Jesus made it possible for us to enjoy the rich, loving relationship with God for which we were created (Deuteronomy 6:5).

“I am the living bread that came down out of heaven; if anyone eats of this bread, he will live forever; and the bread also which I will give for the life of the world is My flesh” (John 6:51).

5. The Messiah Is God in Flesh

One of the most striking messianic parallels in the Passover is the matzah tash. This special pouch contains three distinct pockets. During the Seder, a piece of matzah goes in each compartment. The last item the participants eat, the afikomen, always comes from matzah in the middle section. It is unclear why or how this tradition developed. Still, some scholars propose that it began among early Messianic Jewish communities. Then, after the destruction of the Temple by the Romans in AD 70, the broader Jewish world adopted the practice.

Whatever the history of the matzah tash, this part of the Seder can symbolize Messiah’s deity and God’s triune nature. The single pouch shows that God is one (Deuteronomy 6:4). Three pockets represent three distinct persons who are God: Father, Son, and Holy Spirit (Matthew 28:19). The afikomen, which can symbolize Jesus in many ways, is from the matzah in the second compartment. This tradition illustrates that the Son, the second person of these three, became a human being. The matzah tash reminds us that Jesus is not merely a prophet or a great teacher—He is God in the flesh.

“The Word became flesh and made his dwelling among us. We have seen his glory, the glory of the one and only Son, who came from the Father, full of grace and truth” (John 1:14).

Matzah is a popular piece of Jewish culture that Yeshua Himself used to teach who He was. This bread reminds us that the Messiah never sinned. He suffered, died, and rose again so that we could have eternal life in Him. Discussing these points is a great way to help your family, small group, or congregation better understand what the Messiah has done for us. Knowing how matzah points to Jesus also builds a creative bridge to share the gospel—especially with Jewish people.

God wants us to know Him. So, He reveals Himself using common items. Jesus taught in terms familiar to His first-century Jewish community. He told stories about sheep, the harvest, and vineyards. He taught where the people gathered—the synagogues and Temple. It is no surprise, then, that Jesus made Himself known through matzah, a central part of the Passover His followers had celebrated every year of their lives. As we consider how matzah points to Jesus, let us rejoice that He came to save us. 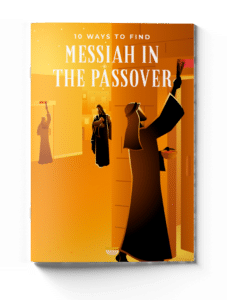 To learn more about the connections between the Messiah and Passover, check out our eBook. Free with a donation of any amount!