The Importance of Compassion and the Image of Israel

Christians are commanded to reach the world for Jesus according to passages such as Matthew 28:19–20 and Acts 1:8. Yet, the motivation for missions—especially to resistant groups, such as the Jewish people and Muslims—often requires an even greater dedication and a broken heart to fuel the passion needed to sustain what can seem like an unsuccessful ministry. Loss of motivation is perfectly understandable, as we are all human.

Jesus’ example shows He was motivated by compassion.1 As Matthew records,

Seeing the people, He felt compassion for them, because they were distressed and dispirited like sheep without a shepherd. Then He said to His disciples, “The harvest is plentiful, but the workers are few. Therefore beseech the Lord of the harvest to send out workers into His harvest.” (Matthew 9:36–38) What is compassion? It is the feeling you have when you see a baby suffering or a person you love in intolerable pain. It is the sense we have when we see pictures of poor children or we walk into a poverty-stricken area and see children in rags and eating from garbage pits. It is the unutterable moan that bursts forth from the depth of our soul because of the human condition that leads to tears and sacrificial action.

In Matthew 23:37–39, we read of the Savior’s compassion and broken heart for His own people, and for all people, when He says,

Jerusalem, Jerusalem, who kills the prophets and stones those who are sent to her! How often I wanted to gather your children together, the way a hen gathers her chicks under her wings, and you were unwilling. Behold, your house is being left to you desolate! For I say to you, from now on you will not see Me until you say, “Blessed is He who comes in the name of the Lord!”

The Apostle Paul also understood the compassion of the Savior and felt the same toward his people. He writes in Romans 9:

“I am telling the truth in Christ, I am not lying, my conscience testifies with me in the Holy Spirit, that I have great sorrow and unceasing grief in my heart. For I could wish that I myself were accursed, separated from Christ for the sake of my brethren, my kinsmen according to the flesh.” (Romans 9:1–2)

This is the kind of compassion that drove the Savior and should move us, as well.

Christians throughout the ages have been capable of great compassion. God has used this desire to accomplish great things, including church planting, serving the poor, building hospitals, providing clean water, and generally improving the lives of the people reached with the message of the gospel.

Today, ministries promote themselves not only through stirring messages during missions conferences or compelling arguments distributed through blogs and social media but also through images that elicit compassion. Mission promoters have always understood the power of graphics and images as one of the chief motivational tools to compel Christians to serve the Lord in difficult places. We understand that people serve when their hearts are broken and feel compassion for those in need.

For example, think about the emotion in an appeal to reach Jewish Israelis with the gospel with images of soldiers in the Israeli Defense Forces standing guard at a Gaza checkpoint. Or consider the effect of videos of missiles coming from Gaza and landing in towns like Sderot, perched on the border of Gaza. And imagine the feelings that flood your soul when you are shown images of small children in Gaza after an Israeli bombing of terrorist tunnels. Who would not be moved by these images?

It is very difficult to think analytically when your heart is broken by the visual stimulation of suffering children. It would be inhuman to think in other terms. In these moments, it is unlikely that anyone would think of fact-checking or of trying to discover the circumstances around the bombing. The images override the facts, even when they might reveal that the bombed buildings were hiding missiles that would cause death to innocent elderly Russian Jews living in Sderot.

Unfortunately, the above illustration is the reality in Israel today. This unbalanced portrayal of the Palestinian-Israeli conflict has done much to paint an insidious view of Israelis. Israelis are portrayed as a colonial power that has no regard for human life.

Unfortunately, this negative image of Jewish Israelis has spilled over to the Jewish people in general, especially in the eyes of next-generation evangelical Christians in the United States, triggering a negative view of Israelis and of the Jewish people. Intrinsically, this is a human and moral problem, but it has also made it more difficult to motivate average Christians to love the Jewish people and Israel and to share the gospel with them.

By God’s grace we need to pray for this to change. And we need to take action to make sure that our fellow believers have a more balanced view of the conflict in Israel. Portraying Israelis as aggressors is unfair and untrue. This type of thinking only intensifies the conflict and pours cold water on the work of Jewish evangelism in Israel and around the globe.

1 Jesus is driven by “compassion,” the Greek word, “σπλάγχνον” splanchnon, which refers to an ache in the deepest part of one’s soul. It is used at least ten times in the Gospels to describe the emotion that erupts from inside a person’s soul, causing them to want to care for another person. 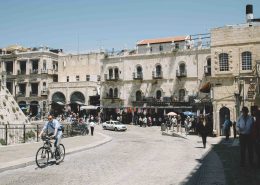 Examples of Faith : Moses and the Exodus
Scroll to top