The author of Hebrews begins this section with a rhetorical question, “And what more shall I say?” The question itself indicates that the writer thought it was not necessary to cite any more examples, yet that is exactly what he does. He now moves through the period of the judges, the kings, and the prophets to show that what he taught regarding examples of faith through the patriarchs and Moses really extend over Israel’s entire history. The author picks out various representatives from those different eras.

He mentions four judges, Gideon, Barak, Samson, and Jephthah, as examples of faith, who interestingly are only mentioned here in the New Testament. He also mentions “David and Samuel and the prophets” in Hebrews 11:32. In 11:33–34, each of the examples from the book of Judges, as well as David, “by faith conquered kingdoms.” Additionally, David and Samuel by faith “performed acts of righteousness.” By faith, Gideon, Barak and David “obtained promises” from God. By faith, Samson, David, and also Daniel, “shut the mouths of lions,” and Shadrach, Meshach and Abed-nego “quenched the power of fire.” In one way or another, all of these examples of faith “escaped the edge of the sword,” and avoided death through their faith in God. They became mighty warriors through their faith and thus “put foreign armies to flight.”

Starting in 11:35, these examples of faith from Israel’s history take a different turn. The writer points out that ultimately faith will triumph even over death. He begins by saying, “Women received back their dead by resurrection.” In the Old Testament, it was the widow of Zarephath whose son was raised by Elijah, and the Shunnamite woman whose son was raised by Elisha. In the New Testament, it was the widow of Nain whose son was raised by Jesus, and Martha and Mary whose brother, Lazarus, was raised by Jesus. But those resurrections were resurrections to natural life, as they would ultimately die again. Others, in order to receive a better resurrection, an eternal resurrection, subjected themselves to great suffering for their faith, “not accepting their release,” not taking the easy way out and renouncing their faith or worshiping other gods. Some Old Testament examples of this suffering for their faith are Jeremiah, who experienced mocking and scourging; Joseph, who experienced chains and imprisonment; Zechariah, who was stoned; and Isaiah, who was purported to be sawn in half by Manasseh. Certainly, the writer of Hebrews was also thinking of Paul who went through all of this then was put to death by the sword.

Others because of their faith were “ill-treated” by their own communities; they were living in poverty, became homeless, were forced to wander in deserts and mountains, and to dwell in dens and caves. Of these people of faith, he added an important parenthetical statement: “(men of whom the world was not worthy).” As he wrote these words, the writer had to have seen the many parallels between those he was writing about and these Hebrew believers who were reading his letter. Many of them had been ill-treated by their communities, had forfeited employment, and were reduced to poverty. Ultimately, the purpose of this great chapter was to encourage these believers in their walk of faith. He concludes with these words in Hebrews 11:39–40: “And all these, having gained approval through their faith, did not receive what was promised, because God had provided something better for us, so that apart from us they should not be made perfect.”

God intended this inspiring chapter to encourage us to continue to trust and obey Him in the midst of temptations, and not to turn away from following Him faithfully. The implication is that theirs was to be seen as a future reward during the last days, as is ours. This gives us motivation to persevere until that day comes. 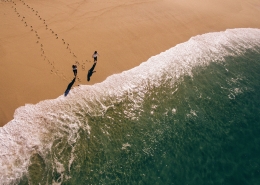